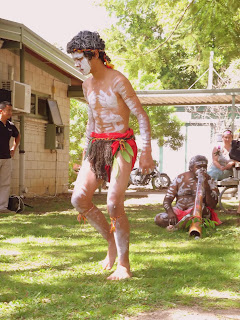 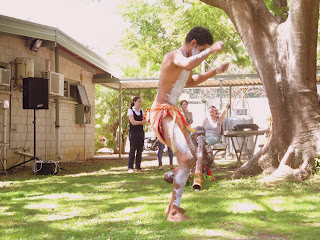 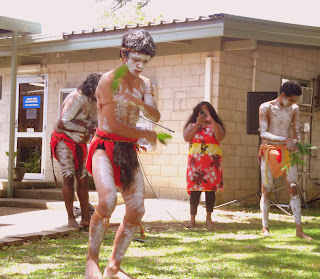 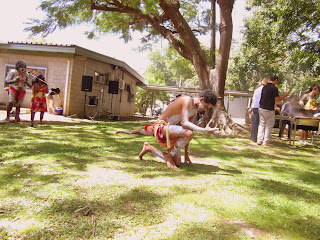 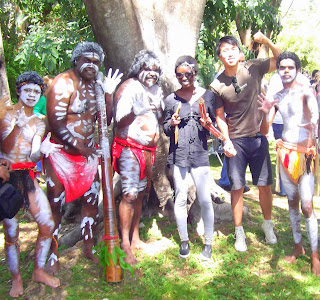 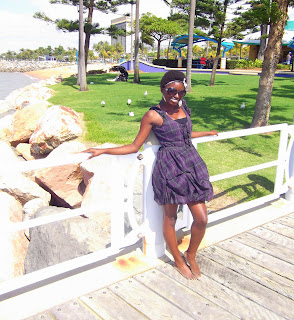 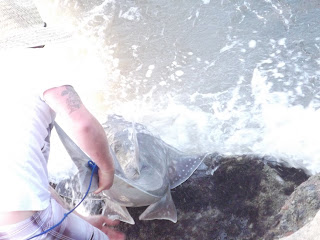 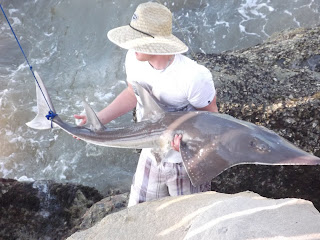 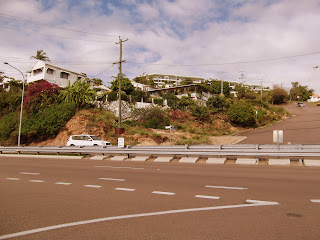 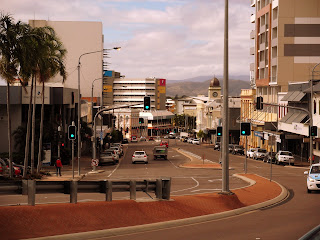 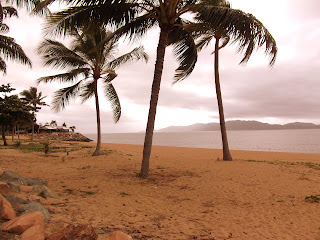 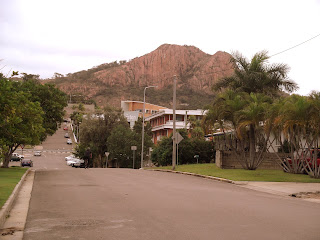 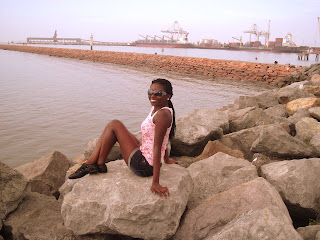 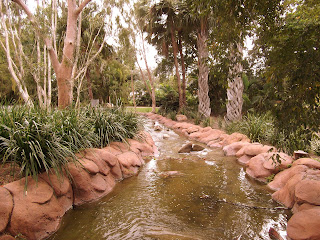 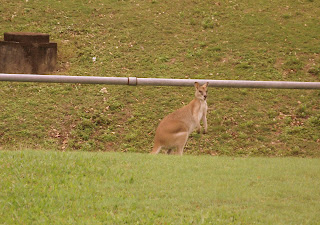 My first impression of Australia, that is, the first hour after I got off the plane in Brisbane, was honestly not a good one. I got detained by the customs officer in which he proceeded to thoroughly search through my luggages, just in case I happen to be trying to smuggle in any illegal items. The officer takes out everything I had so carefully packed into my luggage just days before, and then stuffs everything back in so that they didn't fit and my lugagge wouldn't close. And this is all happening 30 MINUTES BEFORE I HAD TO CATCH MY FLIGHT TO TOWNSVILLE!! Not only that, then he takes out my journal and starts reading it right there! Since when did a basic luggage search involve reading someone's journal?

After I got done with security, I didn't know what gate to go to in order to get on my flight because it wasn't written on my boarding pass. As I was asking for help from one of the officers, I heard over the speakers "Ms. Ay-kinsanmi, please report to gate 21 to board your plane, your flight will soon depart". Then I started running towards gate 21 (which, I realize now, must have looked really funny because I was carrying a lot of stuff). I almost ran into some people, but I think they understood my rush.

I was the last to get on the plane and the first thing I noticed was that everyone, I mean EVERYONE, was in some sort of business attire, complete with suits, ties, and perfectly shined shoes. They all looked like they were going to an extremely important meeting. And I walk in, out of breath, wearing my purple lambda phi xi shirt with my bright pink Purdue shorts (not that I was trying to show school pride or anything) flip flops, and holding a pink snuggie. I pretty much looked like a 12-year old, not to mention, that everyone on the plane looked at least 30 years or older. Worse, my seat was all the way in the back, and as I walked by, a few people looked at me in a way that said "You're not from around here, are you?"  However, I successfully made it to my seat; but not before, accidentally, hitting a couple of people in the face with my giant purse.

Then I get to Townsville and they tell me my luggages did not arrive on the same flight as I did.

On a brighter note, the people at James Cook were really helpful. They helped me find a place to stay and showed me around the town. I took a mini tour of the university and it's really beautiful. It's surrounded by palm trees and there's a giant mountain right behind it that I would really like to climb (pictures coming soon). There's also a night club right in the middle of campus. I can't stop laughing about that.

Bags - still being packed
Plane tickets - purchased
Passport - got it
Place to stay-???

My 26-hour journey to Australia begins tomorrow in the a.m.! But before I start to stuff my suitcases with unnecessary clothing and hair appliances, I ask myself this question. "What exactly should I pack and how much?" After all, I don't want to end up dragging all this with me around the airport.

But, I think women are genetically pre-disposed to over-pack. How am I supposed to pack light for a six-month trip?  What if I can't find my special Conair hair dryer, the one with comb attachments, in the stores over there? What if they don't carry my brand of Olive oil hair conditioner? What if these clogs that I haven't worn in 6 years are the latest fashion trend in Australia? Maybe I should just take them all, I'd hate to get there and realize I'd forgotten something (worst. feeling. ever).

I generally prefer to eat Nigerian foods over American foods.


It's no problem finding Nigerian foods in the U.S., there are African supermarkets almost everywhere. But I don't know if I'll get the same luxury in Queensland. What if there are no African markets there? Which raises the questions: "are there many Africans in Australia? Should I carry a bag of pounded yam with me?"

On the other hand, I'm definitely looking forward to new experiences, especially in the food area!

What? No place to stay?

Technically, yes I don't have a place to stay. I decided not to stay in the dorms because it costs about AU $300 per WEEK ( US $308.97). And calculating that I'll be there for 6 months, that's AU $6,600 for one semester (yeah, my jaw dropped too). This is almost as much as an academic year at Purdue.

So I decided it's best to rent an apartment close to campus instead. Looking online, the cheapest apartment I've found so far costs AU $110 per week, that's AU $550 a month, which isn't as bad; but the average apartment is around AU $250. So I'm thinking either this apartment is infested with cockroaches or it's somehow falling apart. Either way, I'm not putting any money down until I get there and see it.

However, the university has provided temporary accommodation until I find my own place, so I won't be completely homeless. I guess that's what I get for choosing to study in a country where the minimum wage is AU $15.96 an hour. Good thing my visa allows me to work!

I have to finish packing, just took time out to write a quick one. My next post will be from Queensland!
EXCITING!!

In less than one month, I'll be leaving for what would be the most exciting trip of my life, which, I recently found out, could also end up being the most deadly trip of my life. While surfing Netflix the other day, out of shear boredom, I found a documentary titled World's Deadliest Creatures. And I, being the thrill seeker that I am, decided to kick back with my plate of jollof rice and watch it. Here's one thing I learned from this 45-minute National Geographic documentary:
Australia is home to  THE most lethal creatures on the planet!


Now being from Africa, you would think that I've already been exposed to dangerous creatures, lions, snakes, and such. But before I moved to the states, the most dangerous creature I had ever encountered was an angry dog that hadn't been fed for days.

Here are just a few of these deadly Australian creatures:

1. The two MOST poisonous snakes on EARTH, are natives of Australia: the inland Taipan, and the eastern brown snake.

According to the documentary,( and wikipedia of course) the Taipan has the most toxic venom of any snake on land. Though no fatalities have been recorded, but that doesn't mean it will never happen!

Next is the eastern brown snake. These react to sudden movement and are found along the east coast of Australia, near Queensland and New south Wales. Wait....Queensland?!?!

Not to mention that the most poisonous Sea snake in the world also lives in... guess where?

2. The MOST deadly fish: the Stone fish

Unlike the others, this doesn't bite, neither does it sting. You don't even have to eat it to get the full effects of its wrath (doesn't really look appetizing anyway).  With this, you only have to step on it for it to inject neuro-toxins into your body.  Its toxins aren't usually fatal, rather, the person suffers an excruciating pain that lasts for hours , for which there is no medication.  And seeing as how this fish disguises itself as a stone, I'd say its fairly easy to step on it. Needless to say, I won't be taking any long, barefoot walks on the beach.

3. While we are on the topic of sea creatures; the MOST deadly jellyfish

Jellyfish stings hurt, but that of the box jellyfish is a whole 'nother level. One tentacle on this thing contains thousands of stingers, and each stinger injects a drop of poison into the victim's body. It's venom attacks the nervous and cardiac system and causes severe pain. These jellyfish can be found along the coasts of the Northern territory and Queensland (seriously, why Queensland?!?!) Luckily, the stingers can be disabled with acetic acid. Note to self: Do not go scuba diving in Great Barrier Reef.  Stock up on vinegar.

4. For the arachnophobes out there, introducing...the funnel web spider

Oz is home to 22 species of venomous spiders. These live both indoors and outdoors, which means these spiders could be, literally, anywhere. In your laundry basket, underwear drawer, cupoard. The funnel-web particularly likes to chill in people's shoes. So you put on your shoes one morning to go to work, and a searing pain immediately shoots through your body. hmm...pain seems to be the weapon of choice among aussie creatures.

5. And of course, Australia wouldn't be Australia without crocodiles.